Need a few creative kids party favor ideas? Look no further. Plus, read on for additional ideas for party activities that will keep your kids giggling all day long! 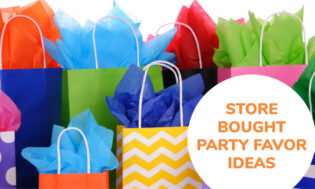 TIP: My favorite method is to stock up on party favors AFTER a holiday or season to use the following year! After an occasion or season you can get great deals/discounts at any store or online at places such as Orientaltrading.com. My closet is now full of ‘little inexpensive things’ for next year’s winter, Christmas, spring and Easter occasions! Keep it small, affordable and simple. Here are some common party favor ideas that you can buy from stores or from Amazon: 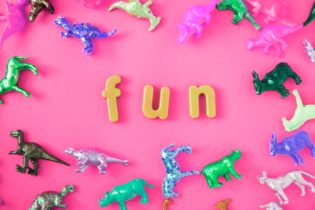 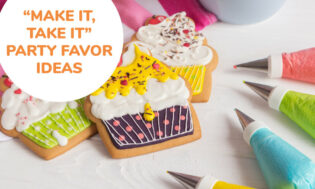 Kids love to make crafts and these double as party favors for children to take home. Some party favor ideas they can craft include:

31.  You can fill empty toilet paper rolls with small candy and tiny toys for a party favor. Once you fill it up– close up each end and decorate the tube… or wrap in tissue paper and tie the ends up with a pretty ribbon.

To make the streamers, have children glue (or have a staff member staple) lengths of crepe papers to the inside of a cardboard tube. Decorate as desired.

34. PomPoms (Make them in colors to suit your theme!)

Great to make for a party, celebration or just for something pretty!
They aren’t only for a Hawaiian theme! 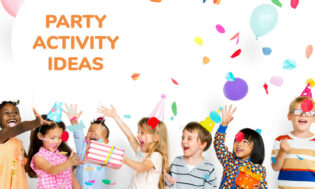 Music & Dancing. Who can hear the music and not feel good! Not only fun at parties but it increases flexibility and balance.

Limbo
A variation to the traditional Limbo is to go under the rope or limbo stick in pairs. Be sure to play the music!

Also have fun with:

Chocolate Face Game
This is in the Low Energy Game Category but would also be fun to start or end a party! Place a piece of chocolate candy in your mouth and see how long it takes to melt! No sucking and chewing it! The one to keep the chocolate in their mouth the longest is the winner.

Interactive Memory Game
You need 28 Styrofoam or paper cups (not transparent) and 2 each of 14 different pairs of treats to hide such as sweets (candy), treat-sized chocolate bars, or tiny gifts. When nobody is looking put the treats in a rectangular grid pattern (7 x 4) on a table and cover with the cups to make a “concentration” game.

Play:
The children take turns in turning over a pair of cups. If the treats underneath match, they may take the cups away, claim the treats as their own and have another try. If they do not match, they must carefully replace the cups and play passes to the next player.

Tips:
Increase or reduce the number of cups and pairs of objects to suit the age and ability of the children.
For a party game for older children, reduce the number of “treats” and throw in the odd booby prize! You could also hide an “instant forfeit” under one or more of the cups–choose something that all the kids at the party would be happy to do.

Guestimations Game
Have kids write their name on a piece of paper along with their guess. Put the guesses in a closed envelope. Depending on what is being guessed–you can award prizes or the jar itself! In case of a tie, have two prizes, or enough in the jar for two. The winning child can also open the jar and share with the group! (I like that one the best!)
There can be variations of this. Examples:

Idea 1:
1. Divide kids into teams 1-4 teams depending on how many are at the event.
2. Make up clues and scatter them  over the party area (or outside if weather permits).
3. Each clue leads to the next and at the end of the trail is a treasure for the team, for example, food, party favors, or prizes.
4. Tip: Color code clues so teams only find their own clues. Time the hunt and see which team gets done first.

Idea 2:
Have children follow clues, a map, or footprints, or arrows (made from sticks or small rocks) to find a special treat (favor bags or food). To make footprints, cut a stencil out of paper and then sprinkle flour inside the cutout area. Younger children can dig for treasure (coins, small plastic animals, etc.) in a sand box.

Ball Toss
Have children toss balls into buckets, laundry baskets, or through hula- hoops hung from a tree.

Worm Squirm Obstacle Course Game
The Worm Squirm is great for a pajama party! This is an obstacle course made of pillows, boxes etc. When it’s your turn, you squirm like a worm on your belly to complete the obstacle course. 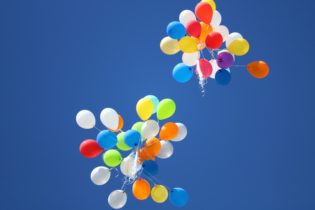 1 balloon per player, not inflated, tape or string to make a target…
Played from a line or circle…

Bean Bag Toss
Buy or make a painted wood or cardboard bean bag toss. Make the shape according to the theme.
Use bean bags to toss—or be creative and toss something based on the theme. Example: Scrunched up white paper or large marshmallows for a winter theme.
There are many “Bean Bag” game ideas here.

Musical Party Favor Game
Have children sit in a circle and pass one favor bag until the music stops. The child holding the favor bag when the music stops– keeps it and steps inside or outside the circle. The game is repeated until every child has a favor bag.

Obstacle Course
Use items you already have to create an obstacle course. For example: children might need to crawl through a box, walk across a board, do a hula hoop, jump rope, ring a bell, etc. before they reach the finish line.
Time each child with a stop watch and encourage him/her to try to beat their own time on the 2nd try (instead of worrying about the other children’s times). Give ribbons or stickers to each child.

Pin the Tail on the “___”
Customize the traditional pin the tail on the donkey game to fit your party theme. Play ‘Pin the Tail’ on the Zebra for a Jungle Safari Party and ‘Pin the Horn’ on the Unicorn for a Wizard Party. Draw your own or use pictures from magazines, coloring books, or clip art programs and have these enlarged at a local copy center.

Themed Hot Potato
Have children sit in a circle and pass around an object (a stuffed animal works well) until a timer goes off.
Examples:

#1 The child holding the object when the timer goes off is “the silly monkey” or whatever fun name ties in with your party theme or the object the children are passing.
#2 Pass the Ice
Play just like hot potato only with an ice cube. When the music stops clap for the person with the ice. You can also keep passing the ice to see how long it will take to melt-great for a hot outside party!
#3 Play cold snowball like hot potato —using a large white Styrofoam ball.

Play this like 20 Questions! Put an object in box and have children take turns guessing what it is. For younger children put the object inside a pillowcase and let them feel it.

2. Draw a Hopscotch Course that ties in with your party theme.
Enample: for a St. Patrick’s Day Party draw a leprechaun in the start box, a pot of gold in the end box, a rainbow from one end to the other, and have children toss a gold coin on the course to play.

3. Play Simon Says,  but change Simon to a name that fits in with your theme.

Example: Replace the phrase “Simon Says” with Santa Says, then follow with the direction. “Put your hands on your head.”‘ All players should be their hands on their head.

4. Play a friendly variation on an old favorite: Musical Chairs.
Instead of pulling chairs from the circle and making kids sit out when they “lose,” have enough chairs for each child, but decorate one special chair and whoever sits in that chair receives a special treat. If you don’t have chairs, just make paper “spots” on the floor and make a special spot.

5. Another variation is MUSICAL BALLOONS where children throw balloons into the air until the music stops.

IDEA: Build anticipation as guests arrive with PARTY FOOTSTEPS. These can be used for a variety of events. The first few footsteps at the beginning of the feet (one word on each step) could say something such as…

Be sure to check out the Party Tips for classroom and school-age program parties! 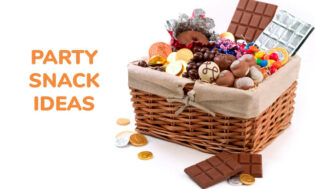 Snack Tubes
Put small amounts of trail mix, cereal, pretzels, etc. in plastic sandwich bags and insert them in cardboard toilet paper tubes. Wrap the tubes in a piece of tissue paper and tie the ends with yarn or ribbon.
Nice way to serve snack at a “party.” Give snack tubes to the children at snack time or to take home.

Gift Wrapped Snacks
In a large bowl, mix together such foods as dry cereal pieces, sunflower seeds, m&m’s, raisins, nuts, and mini marshmallows. For each child put a serving of the snack mix in the center of a party napkin. Bring the sides of the napkin together and tie with ribbon.